There is an intriguing blend of pitch bended guitar textures and jazz-inflected vocals running through the Bushwick based band Surfing. 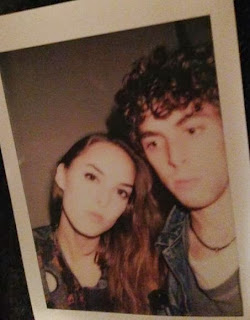 Moving the dreamgaze genre in a similar direction as fellow Brooklynites Sua (and Night Manager before them), the band's marriage of a more sophisticated vocal style (and haven’t we had enough of tuneless shouting?) with multiple layers of driving, hook-heavy guitars is surely a welcome trend. Their lone track (so far) “Hollow Sparrow” throttles along like “Mustang Ford” era Swervedriver, this comparison made all the more accurate by fluid, looser, fill-loaded drumming.

Jordan Stern’s voice is strong with a tonal quality and phrasing reminiscent of Caroline Crawley in 1992’s Shelleyan Orphan.

Surfing on The Deli Magazine by Dave Cromwell

One can't help but notice a curiously vintage quality to the synth driven sound of Brooklyn’s Twintapes, a NYC electro pop trio brainchild of Pavel Rarera (pictured) that - without any support from the major music blogs - has recently gone viral on Youtube with a few videos. 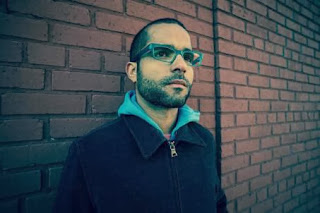 Triggering devices that reference electronic pioneers Kraftwerk all the way up to current trendsetters The Knife, a balance between groove and chill is skillfully reached. Vocals are delivered with a more soulful approach however, positioning their sound closer to dance than the harsher textures of industrial.

Augmenting the two keyboardist is a percussionist who incorporates traditional drum set pieces like snare drum and highhat cymbals alongside electronic beats, giving the band a welcome element of human groove within these traditional rock structures.

Twintapes on The Deli Mag by Dave Cromwell

Celebrating the release of their debut album “Sack Lunch” on November 12, Brooklyn’s Slim Wray is the latest entry in the burgeoning NYC blues rock genre. 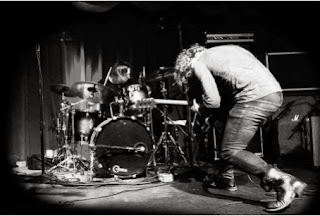 The duo of Ryan Houser (guitar/vocals) and Chris Moran (drums/backing vocals) play a stripped down hybrid of aggressive blues that combines punk, pop and garage thrash into a larger than sum-of-its-parts sound. “I Gotta Girl (With A List Of Needs)” hearkens back to early-era White Stripes, alternating hyper-passionate verses with muscular instrumental breaks. “Reaction” tips in a more pop direction by way of a traditional chord progression and harmony background vocals. “Bear”( streaming below) is built around a “whooo hooo” vocal hook, while stretching out over chunky chords and thrashed cymbals. “House Of D” comes by way of acoustic guitar with vocals delivered in a conversational style that shares similarities with fellow new-blues Brooklynites The Dough Rollers. 12 solid tracks in all, the album includes a cover as well, with a delightfully faithful rendition of the Van Morrison (and re-interpreted by Patti Smith) classic “G L O R I A.”


Slim Wray on The Deli by Dave Cromwell 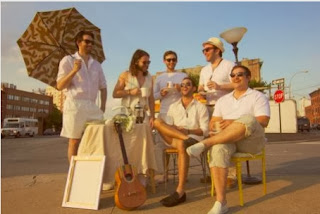 Hearkening back to early 80’s MTV hitmakers like Spandau Ballet, The The and Haircut 100, an unencumbered verse structure sets up the progression to follow. When the change comes, its grandiose swirl would make the aforementioned bands proud. However, a more sophisticated chord used on the turnaround back into the verse suggests greater songwriting acumen. “In the hour where we all come to life,” emerges as the dominant vocal hook, extolling a fascination with the possibilities that await us. In additional to the obvious physical garment the songtitle references, there may an intent to touch on the psychological shields we often wear in public. Or, maybe it’s just another makeout song. This too is the source of where ‘we all come to life.’


Fishdoctor on The Deli Mag by Dave Cromwell 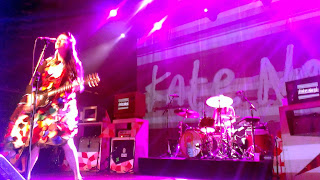 Playing in front of a packed out audience at New York City’s Terminal 5 on Saturday November 9, Kate Nash rewarded her adoring fans with high-energy, emotionally-charged show. Touring in support of her third full length album “Girl Talk” and subsequently released EP “Fri-End,” the evolution of Kate’s sound and stage presence is quite impressive. 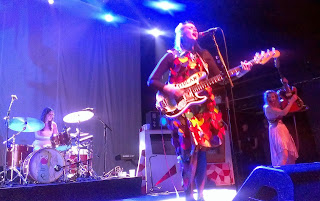 Over six years ago, Kate came to our shores as a piano playing singer-songwriter touring behind her breakout hit album “Made Of Bricks.” Although there were occasional signs of an underlying defiant attitude in some of her more popular songs like “Foundations,” which boasted the lyrics “You said I must eat so many lemons, 'cause I am so bitter. I said "I'd rather be with your friends mate, 'cause they are much fitter" – the overall tone of that album leaned towards sensitive introspection. 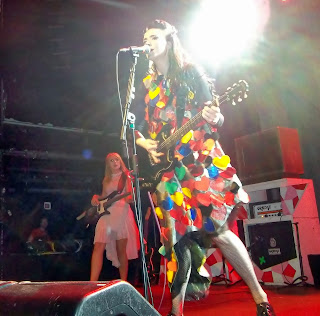 The Kate Nash of today shows a young woman that has evolved into a determined presence, daring herself to take chances. Although many of her newer songs still appear to be inspired by personal relationships (and the heartbreak that comes from their failures – for instance the recent single “OMYGOD!”), there is now very much a feminist empowerment theme that runs throughout much of her work.

Initially stepping out onstage dressed in a red ensemble and minus her band, she opened this show with the final track from “Girl Talk,” the gentle “Lullaby for an Insomniac.” 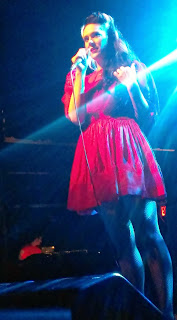 Her band then joined her as Kate went off for an immediate costume change. 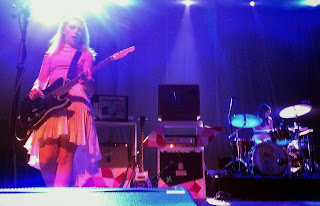 Once back, Kate was wearing what one might describe as a “heart-leaf dress.” Although there may be some deeper meaning behind this loosely draped and frankly less-than-flattering attire, that point could be lost on some. As counterpoint, her all female band wore white flowing dresses that more pleasantly celebrated the feminine form. 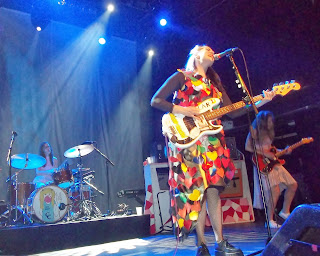 Regardless of the frocks worn, the band performed at a very high level, as they faithfully recreated album tracks spanning all three records. Ripping through an explosive set that featured crowd pleasers like “Sister,” “Death Proof,” “Kiss That Girl” and “Do Wah Doo,” a particular highlight of the night was the over-the-top performance of “OMYGOD.” 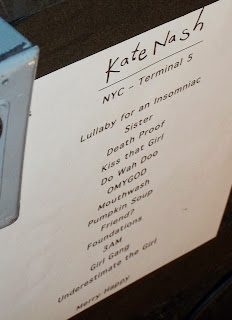 Just midway through the set, Kate took this song as an opportunity to enter the audience (up over the barricades and right into the middle of the crowd) jumping up and down with her adoring fans, and even letting some take a verse on the mic. That particular performance is captured in this video right here:

After that mayhem, Kate played a few songs from her debut hit album “Made of Bricks,” like “Mouthwash,” “Pumpkin Soup” and “Foundations.” Sandwiched in between was current track “Fri-End.” Things rose to an even higher level when during the song “Girl Gang” she invited a number of fans from the audience up on stage to dance around with her. Kate then coordinated a number of them out for a crowd surf, before ultimately throwing herself back into the audience once again. 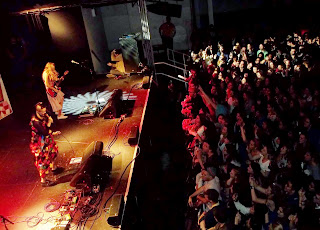 Just when you thought she may never even touch the piano during this show, the lights dimmed and the road crew quickly made over the stage. With her piano now front and center (and having changed clothes again – this time a much more attractive black and white ensemble), Kate played a celebratory version of her classic song “Merry Happy.” 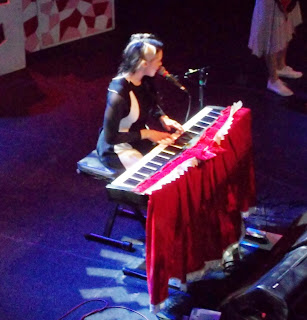 Post-show activity afforded me the opportunity to chat with Kate and update our photo together. 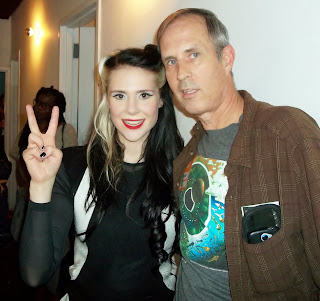 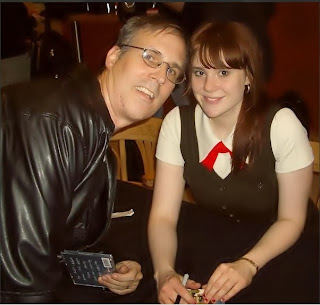 Supporting Kate on this tour is former New Yorker and current LA resident Katy Goodman and her band La Sera. 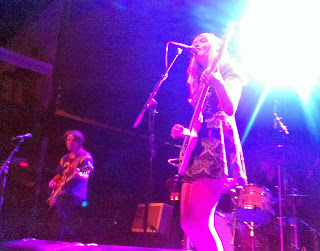 Most New Yorkers have seen Katy over the years with either La Sera or her original band The Vivian Girls. Like every other show of hers I’ve seen, it was a most entertaining experience. Katy has an easygoing personality that that shines through from the stage. 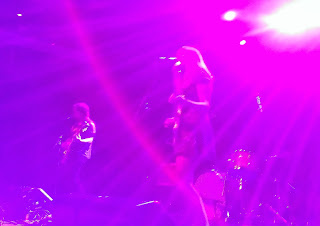 Of particular note was her last song played, which she announced as a brand new one from her forthcoming album. The band jammed out hard on this one, creating a sense of anticipation for the record to come. 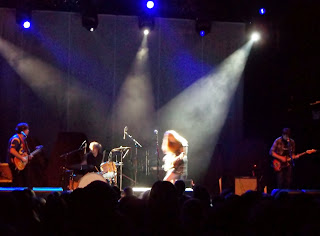 During South By SouthWest in 2012 I conducted an in-person interview with Katy, which can be viewed Here

A previously published version of this Kate Nash and LaSera at Terminal 5 review can be found Here at MySocialList.  That posting features an entirely different set of photos I shot at the show.

That was such a fun show, Anouk. It's really something to see how she has evolved over the last half decade.

Very nice review Dave! Great pics and vids, all songs are really nice, my fave, "Twintapes WDWG" it's so cool and danceable, love the rhythm, i like it so much!

I gotta agree, that video is really sweet. The three girls going out and having fun (after one gets accepted to college) is a really cute storyline! Of course it helps to have a great song to go along with it too.

Ooooh that Surfing song was really nice - I hope to hear more from them! I always find something I like a lot in your blogs. Thanks!

Hearing that one Surfing song makes me want to hear more by them. Hopefully they'll put out some more tracks soon, Midnite Rambler. I like the direction they're going with this particular sonic genre.

cool stuff.
even though i might not meet ear to ear on each song, though i totally dig the performers (and some more then the others).

surely i'll do some digging about one or two songs more.
so don't be wondering how they got on my fb wall. :)

Always great to hear your thoughts, Mr. Smork. And it will be a pleasure to see you featuring any of these acts here on your FB wall (knowing the inspiration first took root via this blog here). Dig away!

Ah, the bookend features here. Indeed, William. Be sure to check out the artists inbetween as well.

wow!! so many cool stuff songs videos and pixs..review itself! Well done Dave... Kate Nash got my attention that's for sure.
Thanks for sharing

Nice one , like the two photos of the first meet and this one. Shows the change very well indeed

I thought the juxtaposition of the first meeting with Kate next to the current one would make an interesting counterpoint. There you can see her transformed from girl to woman. I've accumulated a few more grey hairs over that time (but still not as many as, say Lee Ranaldo or J. Mascis) :)

You always feature something interesting here Dave - you usually manage to present bands I'm mostly totally unfamiliar with due to what I perceive as some differences in preferred musical styles but that's cool because I get exposed to stuff I might not hear otherwise. For this round my favorite artist is Surfing - a great sounding band - and I look forward to hearing more of them. I like the Slim Ray track as well. The Twin Tapes - I know plenty of people like that kind of sound but it really does nothing for me. The Fish Doctor track reminds me of some of the stuff a few friends of mine were getting into back in 8th/9th grade just as I was discovering Venom and such, - a long way from that kind of sound, LOL.

I'm always interested in reading your thoughts on the bands I present here, NYCDreamin. I'm not surprised you like the Surfing and Slim Wray tracks the best. You are a 'rocker' through and through.