With the summer months now upon us, these closing days of June provide occasion to highlight recent features I’ve written for The Deli Magazine. Included are a number of significant pieces published on the website, as well as those appearing in the Spring Print Issue (No. 34, Volume 2). 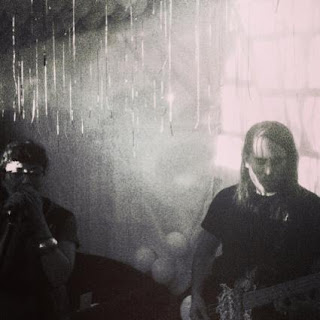 An unsettling sense of foreboding runs throughout “Wild Like Us,” the A-side single from Brooklyn's Courtship Ritual, who recently played their label GODMODE's show at the Northside Fest. Evoking the spirit of 90’s era 4AD artists like His Name Is Alive and their disquieting “Can’t Go Wrong Without You,” ominous overtones emerge from within the spaces surrounding the song's sparse arrangement. B-side “Biesenbach on the Beach (Klaus)” maintains a similar level of spaciousness, driven along a singular bassline and minimal slap percussion as vocals repeat the lines “grey fox grey – beach day.” Recorded by Colin Alexander and mastered by Joe Lambert, the tracks are available digitally worldwide and as a limited edition cassette on the GODMODE imprint.


Courtship Ritual on The Deli by Dave Cromwell 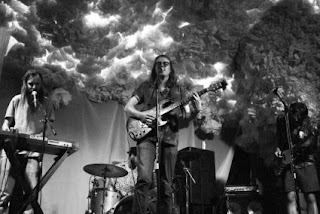 “Fade to Grey” is an enticing chilled-out track being offered up for free by emerging dreampoppers Rohypnotise on their bandcamp page. A loose and jammy drum pattern rises up from the depths, with soft, dreamy vocals quickly entering the mix. The vocal phrasing and subsequent deliberate matched-stepped chord progression brings to mind the work that former Depreciation Guild and current Ice Choir creator Kurt Feldman does so well. There’s sophistication in the songwriting and recording here, with the initial pattern giving way to a much bigger centrally located hook. With plenty of movement throughout the track, little sonic surprises like tambourines and keyboad lines appear at surprisingly opportune moments.


Rohypnotise on The Deli by Dave Cromwell 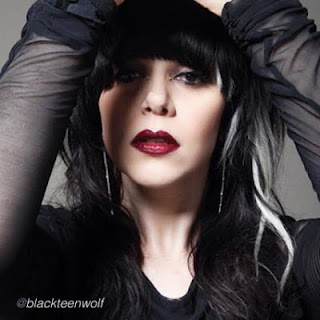 Elements of Kate Bush at her most adventurous emerge in the vocal stylings of Zorah Atash as she sings with her band Azar Swan on the hypnotic new single 'In My Mouth.' Its rhythmic pulse pushes forward with a teutonic minimalism that somehow manages to also swing in the process, positioning this track next to the output of Swedish electronic duo The Knife. The subject matter and overall sexual overtones is as primal as it gets, and the relatively new genre classification called "Witch House" may be as good a place as any for this emerging sound. The track has been released as a digital 7” on Pendu Sound Recordings and is well worth adding to your goth-dance playlist.


Azar Swan on The Deli by Dave Cromwell

The Deli Magazine recently put out its Spring Print Issue (No. 34, Vol. 2), which features the Best of NYC Emerging Artists.  A number of Dave Cromwell features appeared within. 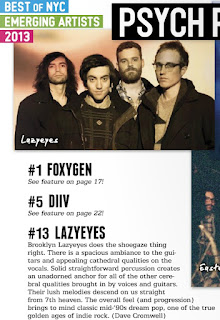 Lazyeyes are no strangers to this blog, as a number of their live shows have been covered here over the last year. Additional Deli Mag Features have served to keep attention deservedly on this promising dreampop band. 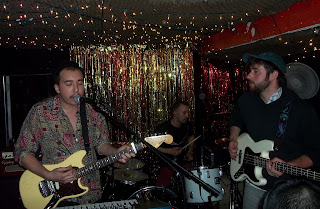 The musical vision of Andrés Pichardo becomes fully realized under the band name Grand Resort. A much anticipated debut EP, "Vanguard Dreams" was released this past September, garnering a wave of positive feedback. “Night Is Dark” features the kind of heart-tugging, bouncing along chord progression you could imagine playing as you fall in love with someone. Undistorted jangle-pop guitars weave through as the repeated refrain “take me away for a week” has you swooning for this perfect girl you’ve just met. 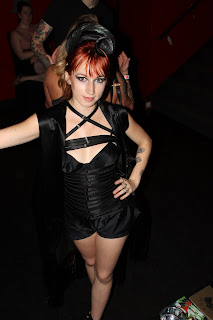 Brooklyn based multimedia artist Christiana Key creates a captivating electronic, experimental musical vision under the name Delphic Oracle. “The Bodywood” traverses the same thumping tom toms and deep bass-synth doom of “Pornography” era Cure, while adding middle-eastern tinged vocals and belly dancer rhythms. In addition to classical training in violin, piano, and voice, one can expect dramatic costumes in the live show. Having recorded her first solo EP with Patrick Canaday of Gemini Stereo in Atlanta , GA , that imminent release is much anticipated. 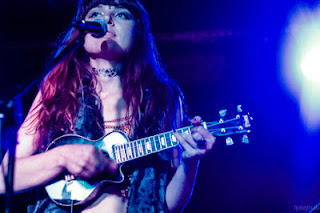 The entire Spring Print Issue of The Deli Magazine, No. 34, Vol. 2 can be viewed online here

Posted by DaveCromwell at 4:16 AM

i'm loving all the female vocalists you have featured here. Courtship Ritual, Azar Swan (yes to Kate Bush!), Delphic Oracle and Anya Skidan all have interesting ideas and the voices to go along with them.

Though I didn't realize it at the time of putting this together - you accurately point out how female-vocalist heavy this blog posting is. If not for the inclusion of Lazyeyes and Grand Resort - it would be exclusively that. All of these features were assignment driven - but - of course I've now come to love each and every one of them ;-)

Wow Dave I don't know how you manage to find all these interesting bands. I especially enjoyed Lazyeyes a lot. I've learned a lot about many bands I would likely have never heard from otherwise and I really appreciate your blogs. Well done!

Everything I do for The Deli Mag is about emerging artists (which is the nature of that publication) - so it stands to reason these performers may not have made their way into your musicial sphere - yet. That's why I make sure to get the word out about those with something worthwhile to offer.

a mixture of some interesting performers.
can't remember all of their names, but there was some dream-gaze, some dream-gaze mixed up with what sounded like country, thou you night figure that i enjoyed most of soundofgrandresortmusic.

Without a doubt - “Night Is Dark” by Grand Resort is one of the more impressive tracks on here, Mr. Smork.

I really enjoyed Rohypnoise and Lazy Eye's tracks on here and so will check them out some more- the others were good- but these two spoke to me the most- perhaps a reflection of just having seen Tame Impala and being in that kind of mind set ;)

I can see that Lazyeyes / Rohypnotise - Tame Impala connection. All three exhibit solid song structures while making use of atmospheric guitar textures to fill the sonic spaces.

Very nice review. Great photos and vids. My fave, Azar Swan and "In my mouth" love the rhythm, catchy, captured me. Lazyeyes is another sweet and nice one too. Cool work Dave. :D

Nice to see these songs getting additional attention here.

My friend "Bug" on Facebook (I know, an amusing screename) wrote this:

Bug Onyourlip said:
I would like to hear more of Rohypnotise. It has a pleasant yellow-poppy insular Summer soundtrack feel to it. Plus I was a fan already of the Depreciation Guild.
Also of big fan of Lazyeyes. It has elements of mathrocks in it plus what sounds like the reverbed soundtrack to Sigur Ros eating hot dogs and watching butterflies in the hinterlands of Iceland.
Thank goodness someone made the Lightning Seeds sound relevant again. Thank you Grand Resort!

After Cromster’s tenure in the Charli XCX Street team, it’s good to see him back pushing the more eclectic side with Delphic Oracle & Anya Skidan. Neither artist can be boxed into any genre that makes sense. And that’s always a good thing.

On those rare occasions when i venture out of the Crypt, I'm blinded by the light. Its easier to let people like you report on what you find out there. In a hit or miss world of "next big thing"s and unicorn poop....Its best to focus on Dorothy's ruby red slippers.
The City That Doesn't Sleep has a huge voracious appetite, it'll chew up today's incoming class and fry a certain percentage of souls. The music that bubbles up from the depths reflects the infinite permutations of cross pollenizing imaginations and delightful curiosity. Azar Swan being a good case in point; music for mind and body with percolating rhythms recalling yet subverting the sterile 80s soundscape with undercurrents of dark, almost gothic ambiance. The hazy airy vocals contain an element of smoke, alluring yet distant. One senses sugar spiced with anger.......
......As always Dave, its a delight to travel vicariously through the caverns clubs & bars with you.

You really should write poetry, Grim Reefer. Your commentary from "the crypt" referencing "unicorn poop" (ha, ha) and "ruby red slippers" is thoroughly entertaining!
Of course I'm pleased to know that some of this entry here has hit the mark with you.

glad you mentioned the change on Fade to Grey, Dave. love that sectional change big time. same thing with Azar Swan, who grew on me. it was fun to listen to Lazyeyes as the Backstreet Boys were muted on my TV while reading Dave's Top 10 list. interesting mashup. i don't plan on falling in love with anyone for awhile, but i do love the guitars on Grand Resort. always fun to be the "visitor from santa monica" on your site.

Found very cool and unique info here in this blog. This is a great addition in my favorite blog list.