Ablebody - All My Everybody - EP Review 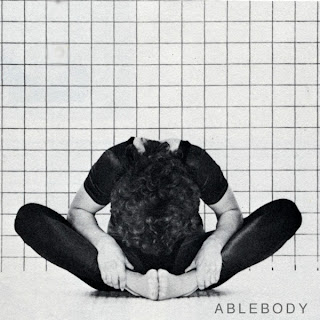 Former Depreciation Guild and Pains of Being Pure at Heart guitarist Christoph Hochheim has created a new solo project called Ablebody, and will be premiering his new songs live at SXSW. Appearing to have put aside his primary instrument in favor of synths, samplers and a laptop, the most surprising aspect are vocals much stronger than anyone could have anticipated (since he never sang in either of those bands). The recently released 5 song EP’s cover image is a seated body with no head, placing clear emphasis on the band name meaning. That of an able body, ready for instructions.

Chimes on the dominant beat accentuate the multilayered atmospherics of first single“Sally Hot Jazz.”  With vocals that evoke Tears For Fears at their peak (“Sowing The Seeds Of Love”) the chord progression does in fact touch the edges of actual jazz. Wonderfully streamlined at under three minutes in length, impeccably crisp synth textures share sonic space with a marching, natural sounding percussion (capably supplied by former Depreciation Guild band member and twin brother Anton) while otherworldly sine waves build to a sunburst conclusion.

“No Room For I” expands on this sonic palette as its near five minutes in length would allow. Brief moments of sparser instrumentation encourages focus on the emotion being conveyed. Curiously, this wonderfully strange and mysterious song’s title does not seem to be mentioned even once. However, hook sequences with the repeated lyrics “one more night” and “I can see your eyes” create the sense of wonder as to why it wasn’t called either of those. Vocal placement is artfully crafted here as deeper harmony cascades under the higher register lead.

The cleverly titled “Phantasy” pops along a synth bass and danceable beat with those wonderful chiming bell sound samples at the forefront. Using perhaps The Pet Shop Boys as a reference point this time, the bridges are still more sophisticated structurally, with minor chord passages lifting the track above mindless dancefloor fare.

“Quick & Painless” slows everything down significantly. Near dirge-like in overall pacing, chirping synth textures evoke “The Man Who Fell To Earth” era David Bowie . The overall feeling is as reverential as seeing sunlight streaming through a cathedral’s stained glass window.

Closing track “Sister Marie” is a Harry Nilsson composition that surprises, not only as a cover choice, but also in its execution. Presenting this one as something you might hear on a post-Pink Floyd Syd Barrett solo album, it is perhaps a fitting conclusion to a most creative debut.

Posted by DaveCromwell at 10:53 AM

Labels: ablebody, all my everybody, davecromwell, davecromwellwrites, depreciation guild, dream pop, dreamgaze, my social list, the pains of being pure at heart

that's a pretty cool stuff! I enjoyed listening and reading. Btw the photo is so cool!

Glad to hear you like the music, Ivanka. I have been a fan of this artist for a while now. As for that photo - well - what happened to his head?!?

i see your writing style is improving. it is really good.
and it looks like a decent dreamgaze record as well.

As you are someone who has followed the output of this blog for years now, Mr. Smork - I'll take that analysis in the positive spirit with which you intended it. Certainly my goal is to deliver thoughts on the music presented here with the highest level of creativity and craft that I can muster. This is certainly a record that slots comfortably into the genre of music often referred to as dreamgaze.

Nice review Dave, I quite like that soundcloud link that you've included

When the words and music come together (and I mean my words as well as the artists), it's a beautiful thing. ;-)

Very interesting review. Nice band. I like very much the song, love the style, so sweet with that captivating melody. Have to say I'm a fan of Tears For Fears and Pet Shop Boys, too, of course! ;)

Very much a fan of the bands he was priorly in and now currently in.

Digged his cleaners from venus cover on his covers EP too

Yeah, Tears For Fears and Pet Shop Boys were two sonic reference points that worked for me. Christoph told me he liked the Syd Barrett reference on the closing track the best!

found 'phantasy' on youtube, so you can hear it there,

I don't think it is easy to write about music, which is a very subjective experience for everyone so I give you a lot of credit in writing about it. I like bands like Tears For Fears and Pet Shop Boys in smaller but I'm always willing to try something new if it is something you recommend. Sally Hot Jazz is a great name for a song.

Hey Midnite Rambler, I totally agree with you that "Sally Hot Jazz" is an awesome song title. It kinda reminded me (for a second) of Lou Reed's "Sally Can't Dance."

I just hit repeat for the...hmmm...9th time. Liking this song...chill but with substance so it doesn't fade into the background. Nice. Thanks again Dave!