Covering shows and artists in New York City (and surrounding areas) is constant source of sonic and visual stimulation.  It's why I live here.  However, I sometimes wonder what it might be like to live in other regions of the USA. More specifically, what are the underground and alternative rock music scenes like there?
Sure, I know about Austin - having attended a number of SXSW festivals.
California has always been on my radar as a dominating force since the early 1960's. But - what about a place like Las Vegas? 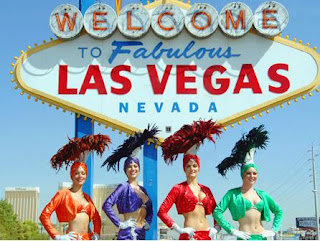 
Engaging in a bit of research, I discovered a thriving rock scene bubbling under the surface, similar to what goes on in New York, Philadelphia, Boston, DC, Chicago, Minneapolis and Austin.

Local hard rockers Microdot have a sound that leans towards the powerful armageddon-fueled force popularized by genre leaders like Tool. The guitar chords are flanged and crunchy, while lead vocals are delivered with a foreboding sentiment.


Listen to "Eternal Youth" for a prime example of this:

Down The Boulevard present a quicker urgency with their hard rock style. "Alibis" comes at the listener with an almost frantic approach. "How could you look in to my eyes - while smiling through your alibis," is the accusatory lyrical refrain.


Systemec delivers a heavy industrial sound that pays homage to purveyors of this genre like Rob Zombie and Prong. "Skywind" more than capably plunders this semi-mechanized sound, while showing a lyrical cleverness as well. Using the time-honored "sky" metaphor, the lyric "watch the sky slip away" can easily be morphed into "watch this guy slip away." Heady stuff.


As one can see, simply scratching the surface shows a thriving underground of rock bands in a city that is mostly known for gambling and more "traditional" forms of entertainment.
A road trip to check it all out live and in person is soon to be on the itinerary.
Posted by DaveCromwell at 7:43 AM

wow, i really love the sound of Systemec!

yeah, i can totally hear the Rob Zombie vibe in it.

as for Vegas, a few of my internet friends live there, and they say the love it.

Glad you like their sound, Misty. I have to agree, out of the three I feature here, I like that industrial-rock sound the best.

That's cool about the people you know in Las Vegas. I've heard a lot of positive feedback on living there as well.

I'm a sweet talkin' guy, Ivanka
(but I never tell a lie)

Very nice bands, about Mycrodot i like Ruby. For my liking I choose "Down the Boulevard" i like so much their style, Take it all (love it), Outta her mind, also a great one.
Systemec: Rememberance is a nice one and Powertrip took my ear, sounds very cool.
Las Vegas, i have friends who went there and they said it's fantastic and if they had another oportunity to go there, they wouldn't think twice and just they would go back.

Ah, nice to hear you listened through many of the tracks, Patricia. I like your choices of the ones you prefer.

As Elvis Presley sang so eloquently (so many years ago) - Viva Las Vegas!

but i see there are way way better bands to check.
really dig last two bands.
nice entry. thanks for new music to check.

Yeah, The Killers are probably the most famous "alternative" (if you can actually call them that anymore) band from Las Vegas.

I was a bit of an eye opener (and welcome discovery) to see a much heavier underground music scene exists there.

dave, bands you mentioned are not that heavy. ;) though they have solid sound. less psychedelic sound.

and they (at-least last two) are way better then killers. ...though i still dig "mr brightside"... :P

im moving to vegas within a few weeks and i wanted to see what kind of places to check out. any suggestions?