Deep into the month of December, a moment is carved out to compile some recent writing features. Four bands whose music and/or live show which has left a favorable impression. 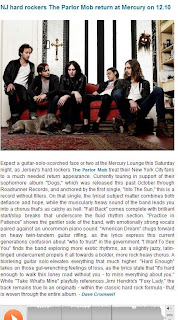 Expect a guitar-solo-scorched face or two when listening to New Jersey's hard rockers The Parlor Mob. Currently touring in support of their sophomore album "Dogs," which was released this past October through Roadrunner Records, and anchored by the first single, "Into The Sun," this is a record without fillers. On that single, the lyrical subject matter combines both defiance and hope, while the muscularly heavy sound of the band leads you into a chorus that's as catchy as hell. "Fall Back" comes complete with brilliant start/stop breaks that underscore the fluid rhythm section. "Practice in Patience" shows the gentler side of the band, with emotionally strong vocals paired against an uncommon piano sound. "American Dream" chugs forward on heavy twin-tandem guitar riffing, as the lyrics express this current generations confusion about "who to trust" in the government. "I Want To See You" finds the band exploring more exotic rhythms, as a slightly jazzy, latin-tinged undercurrent propels it all towards a bolder, more rock heavy chorus. A blistering guitar solo elevates everything that much higher. "Hard Enough" takes on those gut-wrenching feelings of loss, as the lyrics state that "it's hard enough to walk this loney road without you - to miss everything about you." While "Take What's Mine" playfully references Jimi Hendrix's "Foxy Lady," the track remains true to an originalty - within the classic hard rock formula - that is woven through the entire album. 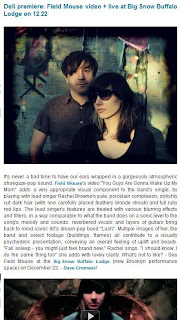 Sweetly sung, reverberated vocals are just the tip of the iceberg with the Field Mouse video (and song) "You Guys Are Gonna Wake Up My Mom." Young beauty Rachel Browne presents impressive imagery via pale, porcelain complexion, stylishly cut dark hair (with one carefully placed feathery blonde streak) and full ruby red lips. Strumming her guitar in a manner remiscent of iconic 90's dream-pop band Lush, the song itself is a brilliant recreation of that romantic and souful period of music. Touching the same emotionally dreamlike place that Austin's Ringo Deathstarr, Seattle's Seapony and Stockholm's I Break Horses do (all contemporary practioners of this genre) Field Mouse put their own unique spin on it, resulting in a gorgeously atmospheric sound. "Fall asleep - you might just feel brand new," Rachel sings. "I should know, I do the same thing - to," she adds with lovely clarity. Multiple images of her, the band and select footage (buildings, flames) all contribute to a visually psychedelic presentation. The overall feeling you get is one of uplift and beauty. What's not to like? 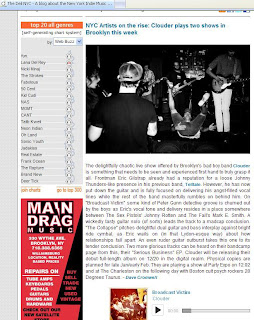 The delightfully chaotic live show that Brooklyn's badboy band Clouder presents is something that needs to be seen and experienced first hand to truly grasp it all. Frontman Eric Gilstrap already had a reputation for a loose Johnny Thunders-like presence in his previous band, Telltale. However, he has now put down the guitar and is fully focused on delivering his angst-filled tales as the rest of Clouder rumbles on behind him. The two guitar, bass and drums combo are better musicians too. In fact, as Eric screams, wails and tenderly emotes his lyrics of what one must assume is pure poetry, Max, Matt, Steve and Jim do a masterful job of creating rock sonics (and yes, sometimes sludge) with the skill of men who still want to be considered serious musicians. And they are. On "Broadcast Victim" a Peter Gunn detective groove is churned out by the boys as Eric's vocal tone and delivery resides in a place somewhere between The Sex Pistols Johnny Rotten and The Fall's Mark E. Smith. A wickedly tasty guitar solo (of sorts) leads the track to a madcap conclusion. "The Collapse" pitches delightful dual guitar and bass interplay against bright ride cymbal, as Eric wails on (in that Lydonesque way) about how relationships fall apart. An even ruder guitar outburst takes this one to its tender conclusion. Two more glorious tracks can be heard on their bandcamp page from this, their "Serious Business" EP. Clouder released their debut full-length album on 12/20 in the digital realm. Physical copies are planned for late Jan/early Feb. They recently played a big show with legendary Boston underground sensation 28 Degrees Taurus at Charleston on Saturday, December 3. A wild time was had by all. 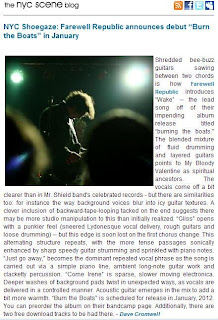 Shredded bee-buzz guitars sawing between two chords is how Farewell Republic introduces “Wake” – the lead song off of their impending album “Burn the Boats.” The blended mixture of fluid drumming and layered guitars points to My Bloody Valentine as spiritual ancestors. The vocals come off a bit clearer than in Mr. Shield band's celebrated records - but there are similarities too: for instance the way background voices blur into icy guitar textures. A clever inclusion of backward-tape-looping tacked on the end suggests there may be more studio manipulation to this than initially realized. “Gliss” opens with a punkier feel (sneered Lydonesque vocal delivery, rough guitars and loose drumming) – but this edge is soon lost on the first chorus change. This alternating structure repeats, with the more tense passages sonically enhanced by sharp speedy guitar strumming and sprinkled with piano notes. “Just go away,” becomes the dominant repeated vocal phrase as the song is carried out via a simple piano line, ambient long-note guitar work and clacketty percussion. “Come Irene” is sparse, slower moving electronica. Deeper washes of background pads twist in unexpected ways, as vocals are delivered in a controlled manner. Acoustic guitar emerges in the mix to add a bit more warmth. “Burn the Boats” is scheduled for release in January, 2012. You can preorder the album on their bandcamp page. Additionally, there are two free download tracks to be had there.

Which is why I featured them ;-)

oh ok, i thought it was a little strange of you to feature such good bands in a worst of the year list??

As you well know, I don't do the "negative thing" here.

This is all Grade A, Choice Quality tuneage.

ohh 4 bands at one time)) cool! great review ! you're doing a good job Dave))
and I agree with Anouk Field Mouse are quite cool))

The Field Mouse song and video is quality.

Glad to hear you dig The Parlor Mob track, Paty.

For sure that one is a "toe tapper!"

As you suspected I'm liking Field Mouse, we are also hearing things this side of the pond about Clouder too !

Great work DC, keep up the good work , and best wishes for Xmas and the new year..

Yeah, I knew Field Mouse would be right down your alley, VP.

But, am pleased to discover the madcap genius of Clouder has made its way to your shores as well!

nice feature, almost epic as you fit all 4 bands in to this.
i got to admit (even if writing is great) i paid most of my attention on first two bands.
i have heard about "parlor mob" before. i think from you, dave. ;) i like their hard solid sound.
and "field mouse" was quiet interesting somehow their echos and strong melody reminded me of band "enigma". even if i not digging much of enigma, but for "field mouse" this my association is good.
nice, dave.

I'm with Mr Smork on this one as I find the first two bands to be the most interesting in this entry.

The Parlor Mob- an amazing band. They have a kind of energy similar to Led Zeppelin and Mars Volta. A very driven, powerful sound and fantastic vocal harmonies.

Field Mouse- I can't really remember the last time I've heard a band with such a gorgeous sound (especially the vocals). It's beautiful. I don't really know how to describe it in other words so I'll just leave it that way.

A great entry to end the year with, Dave.

Nice to hear the positive comments about those two bands, guys.

Yeah, I've been promoting The Parlor Mob every chance I get - since 2008. Zeppelin and Mars Volta are good sonic comparisons, for sure.

And the beauty of that Field Mouse song and video - I can't get enought of it.