Wading through the numerous email promotions touting the "next great band" is not always an easy task. However, doing your best to at the very least give each a listen can often pay dividends. Such is the case with San Francisco's Sleepy Sun. Their debut album Embrace was an instant hit with me, and so it was off to The Music Hall of Williamsburg in Brooklyn on September 15, to see if the much ballyhooed live show would be as impressive. I'm happy to report that is was a resounding yes on all accounts. 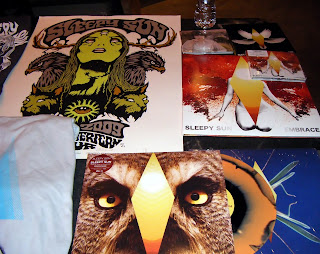 Spread out across the unusually wide stage, the band's two guitarists took the outermost points, with Evan Reiss bookened all the way left and Matt Holliman all the way to the right. Filling in from left to right, then was bassist Jack Allen, lead vocalist (and harmonica) Bret Costantino, drummer Brian Tice and female vocalist Rachael Williams. Their songs are sprawling and epic. Early in the set, one over-five-minute ramble began with Bret whistling like a Spaghetti-western theme out of a Clint Eastwood movie. 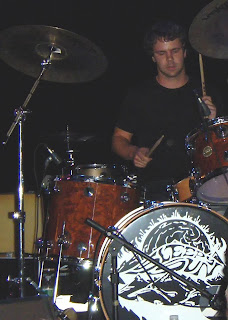 The band quickly set the groove as Bret then proceeded to sing in the more traditional sense. But soon tempos changed and slowed down, as Rachael sang her vocal part (in tandem with Bret), as a new rhythm emerged - dark and heavy - guitarists Matt & Evan making their presence felt with Black Sabbath-style riffs - slow, weighty and lumbering. Only to drop out for more dual singing from the bands two vocalists. This back-and-forth play went on for a bit - then more heavy rifffing, to stopping while the vocalists were featured. Soon enough it was back to the full band driving rhythm. Of note was Rachael's bright and clearly noticeable tambourine playing. Brian's drumming was all tom-tom thunder and cymbal crashes. Bret makes guttural sounds and bird chirping noises. It's jammy - but not the light Grateful Dead style jamming - it's heavy, lead-boots sonic forays. Only to be halted as the vocalists sing in harmony against a more gentle background.

Listen to this performance here: 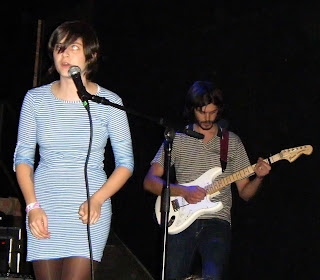 "New Age" has a thumping drum, beep beep percussive motion and distant vocal sighs that all contribute to lay the bed for Bret's echo-y vocals. Guitars rip off sophisticated lines with 60's-style Jefferson Airplane reverb on them. Here the bassline finds it's place of prominence amongst the instrumentation. The undercurrent of cymbal-less tom tom thuds and snare drum punctuation keeps the rhythm in a steady forward motion. "The new age of silence" (big pause) "comes with the sound," Bret sings. More layers of guitars provide a fully distorted wash underneath as additional fluid guitar lines riff over top. It concludes with the sort of guitar chaos that Lee Ranaldo and Thurston Moore of Sonic Youth are noted for. It is suffice to say that one Sleepy Sun song goes to many different places. 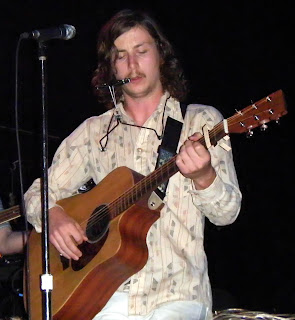 However, it is the bands epic centerpiece to their set and the show - the brilliant "White Dove" that truly underscores what Sleepy Sun does best. A nearly nine and a half minute piece on their record, which in and of itself is astounding in this day and age of quick sound bytes and fast moving information overload. Sleepy Sun is unconcerned with any of that though, as they stretch out and sprawl all over the sonic landscape. Another heavy Sabbath-esque groove is laid about by the bands two guitarists, as the dual vocalists sing in a tandem where Bret whispers his lines while Rachael wails like a Siren. Picking out bits of lyrics here and there, it seems that "soon, you'll fly alone - soon, you'll die alone" is one repeated phrase. 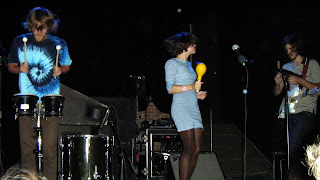 The guitar solos are fluid and quick, as Brian throttles the drum kit for maximum effect. The whole piece goes off on a near Sonic Youth-like breakdown - then all musicians drop out as Bret and Rachael make echo-y, sighing sounds. The lights are completely dark and it is quite a "spooky" minute. The band launches back in and even more guitar solos are fired off. Then back to the heavy descending hook. It gets quiet again and then there is almost a western-style passage delivered. Lovely harmonies between Bret and Rachael, followed by a lonesome harmonica break played by Bret (who's also playing an acoustic guitar). Surprisingly, it ends there. But then again, maybe not so - I mean they have to end it somewhere - right? It's grandiose - berserk - and altogether fantastic. 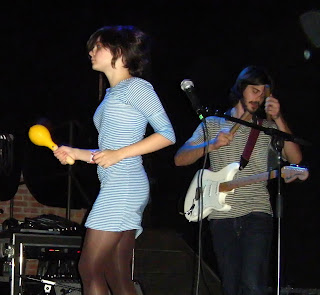 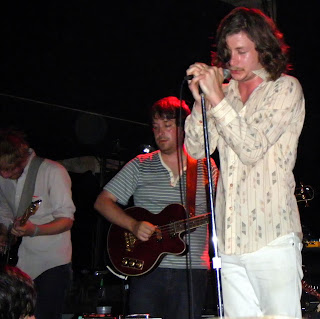 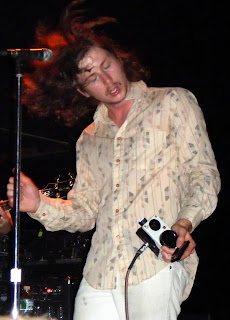 as well as generating sounds from mysterious sources 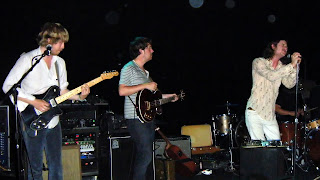 Listen to this night's performance of "White Dove" here:
http://www.youtube.com/watch?v=AJrnmDD6wP8 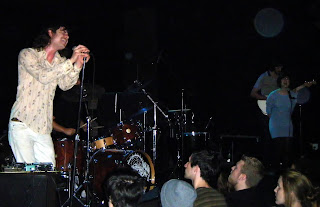 They even have a song with the clever title of "Sleepy Son." The band gives "birth" to this child in a slow, dreamy, casual moving way. Lots of distorted wah-wah guitar textures and lonesome traveler harmonica. The lyrics are delivered by Bret and Rachael in a similarly slow and dreamlike way. "Good by blue skies," they sing. Soon the heavy slams you in the form of classic, lumbering metal God riffs. 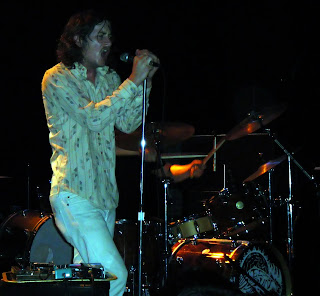 This is the unique hook of Sleepy Sun - the seemingly effortless way they can morph at a moments notice from gentle, quiet pastoral moods to bombastic guitar-hero riffs. There are even bits of prog-rock descending lines - only to be then replaced by blues monster harmonica. 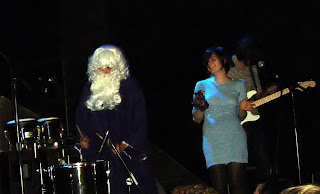 The band also played an extended jam version of the Fleetwood Mac classic "The Chain" on this particular night. One amusing aspect of their live show was the additional percussionist who came out on stage disguised as a "Wizard". Looking like a cross between Santa Claus and the "elder" that Jimmy Page morphed into in their seminal film "The Song Remains The Same," he provided a comedic sideshow during his time onstage. Standing closest to vocalist Rachael, she could hardly contain her laughter throughout his appearances. 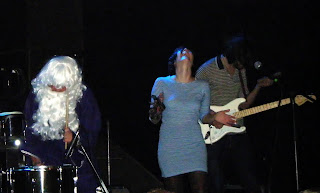 Rachael delights at her wizard percussionist 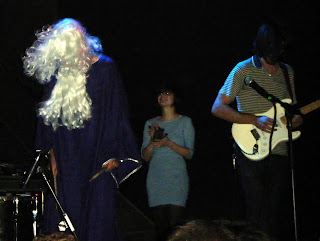 I caught up with both guitarists sitting at the bar after the show to check their state of mind. The flashier of the two - Matt Holliman, was also the more talkative. Having read their press release, I noticed references to them having honed their craft in an occult influenced creative community. I asked Matt directly about this, or if they actually engaged in occult practices. 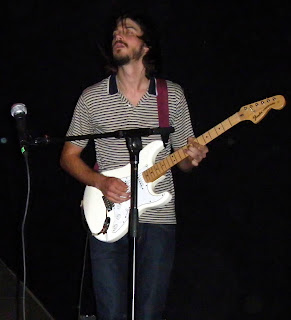 "I don't think so, in the literal sense," said Matt. "We don't crack open a book and start following directions in some sort of spirit. But we do pull influences from various occult practices and religious things, I suppose. We put it together for whatever fits our needs at the time." 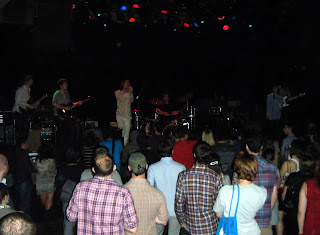 Their steady touring has put them together with other artists they've come to know and respect. "Earth was very inspiring," Holliman continued. "I've been a huge fan of Earth for a while. When we played with them they were on their newest record at the time which was "The Bees Made Honey in the Lion's Skull," and we were all aware and influenced by the older Earth material. But we'd throw on "Bees" when we're driving through Texas and all of those states, and we'd get a western feel of this wonderful guitar-play and rhythm of the Red Rocks and cactus - and it was wonderful." 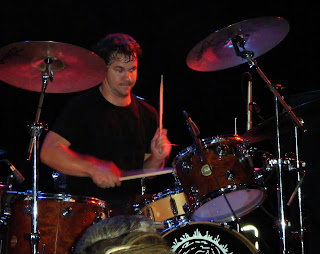 Sleepy Sun are in the midst of a massive tour, playing nearly every night right through till the end of the year.
Check them out if you get the opportunity.
Find all their tour dates here:
www.myspace.com/sleepysun
http://www.sleepysun.net/
Posted by DaveCromwell at 11:20 AM

Wow! First Dave describes in detail what Sleepy Sun executed throughout the unnamed song at the top of the piece (I reckon the capture of a set list pic eluded you this time), and then I click the video link and it is exactly as Dave described. Uh-Oh, I'm getting deja vu as I just wrote this, so I think I'd better give Mr. Smork some props here, as I believe he once said something similar about a past accurate Dave account. Sorry for the lack of originality, but-- Way to go (again), Dave! History repeating itself-- in a good way. Really nice vocal sound and dramatic drumming in this band. Just a really interesting performance, especially the strange middle section of "White Dove." Me likes.

Great pics, and a thorougly informative read about the gig...It felt I was there. I could almost smell your aftreshave D.C.!

so....
review looks great a bit not so easy reading as some previous, but interesting. i like short intro about the bands origins and stuff. the definition of their gig that what i found not as easy to read as the beginning. :) but i got over myself and read... i admit the picture that i got from the article and from the video was a bit different - prefer article "picture". :)
but there is one thing i could say: i noticed that dave already got it's own writing style thing. i think it comes together with sort of experimentation and looking for something new in his reviews. so well done dave. :) nice review. i like that.
as about the band: from the given video i found it not quiet as they been described by dave, cause it seemed like they are experimentating not playing like "worked part". i like the female singer's voice i think she could sing not only rock, pop or underground stuff. :) how can i not to mention that she looks pretty as well... :)
that's my good thoughts about this.
feel the free.

well that wizard fellow certainly looked interesting! I don't think I would have been able to keep from laughing myself, haha. love all the pictures, the ones of Rachel with the maracas are well shot!

interesting looking merch as well, from what I saw in the first picture. I will deffo give them a listen, sounds like something I might just be able to get into.

Yeah, Dave, this was another review I had read back when you posted it. I adore Sleepy Sun, and this was an great description of their performance, thanks for posting! Great photos, as always ;-) And now I do see my name in your 'follower' section, it's correct now.

Glad you to read you are a fan!

Let's see something new soon from you as well ;-)

Great detailed, review and a LOT of information about the band. I already feel like I know them for a while, thanks to you, Dave.

I *love* it when the band's artwork reflects band's music. And first thing I've noticed about Sleepy Sun is their extraordinary, psychedelic artwork. I just love this style and I miss all those great covers from late 60's- it would be great to get into a music shop one day, look at the new recordings and see that 99% of artists have psychedelic artwork on the covers ;)

So the music is just as cool. It takes a listener to another world. It reminds me of The Doors, Dr John and a little of Crazy World Of Arthur Brown.

They've got one new dedicated fan from now on.

Thanks for the tip Dave. Nice review, too.