I had previously discovered and subsequently wrote glowingly about them when they played The Megaplatinum Festival at Trash Bar
See that feature here:
http://mog.com/DaveCromwell/blog_post/166577

On this night, they played rehab on Avenue B, downtown NYC http://www.clubmidway.com/ and the show would feature not only my newfound faves SPDB, but a set from local legends The Bullies as well.

Pre-show I ran into both Jimmy and Pete from SPDB, and we did a bit of chatting beforehand.

Among other things they told me they were going to see the amazing King Crimson soon. At that point we realized the mural on the wall was an exact recreation of one of Crimson's classic albums, so 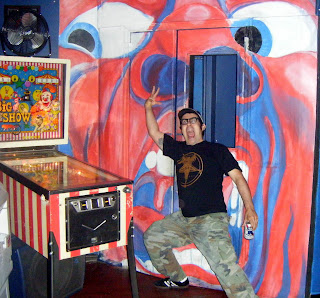 Jimmy just had to pose in front of it.

Hearing that The Bullies were about to come on I headed on downstairs in the bowels of the venue. 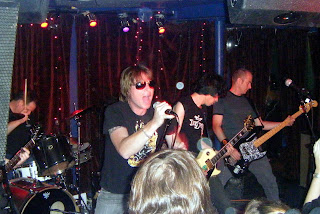 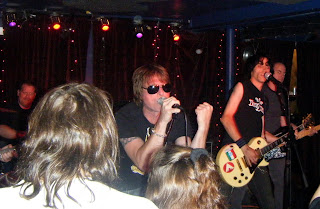 Their crowd of loyal followers were totally digging it, and I found it to be amusing, engaging and a quality rock show all at the same time. 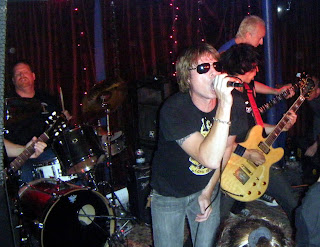 This particular show of their featured a special guest musician - none other than Jeff Magnum of the legendary Dead Boys. The dude's hair may be grey now, but he can still throttle the bass! 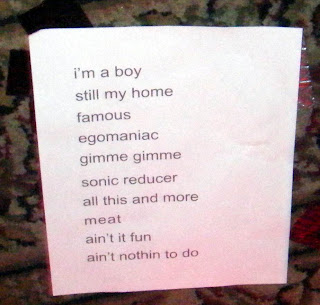 The Bullies set list. As you can see, there were a few quality Dead Boy covers on there. In particular, the song (repopularized by Guns N Roses) "Ain't It Fun" was a particular high point of the show.

Bullies off, it was finally time for the muscularly riffaged grooves of Super Potent Death Baby. 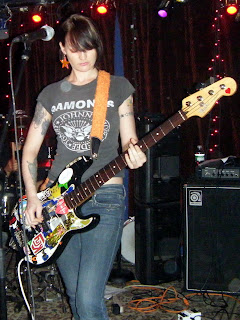 Fronted by the riff-steady Suzy The Fox, SPDB ripped through a full-throttled set that brought sonic satisfaction to my ears. 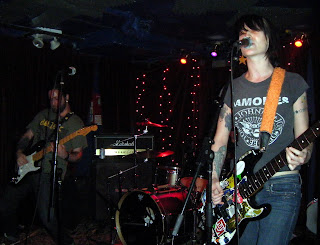 As they are most certainly a power trio (think Cream with a punky edge to them), the band is masterfully filled out with Pete-the-Meet on shredding guitar, and Jimmy-the-Weed on thunder-drums. 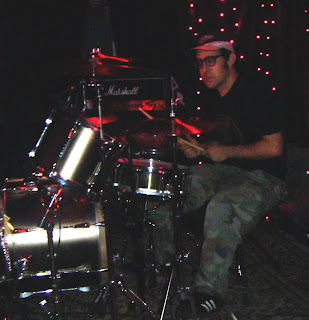 Drummer Jimmy The Weed boomed around the cans and cymbals with hyper-galactic energy. 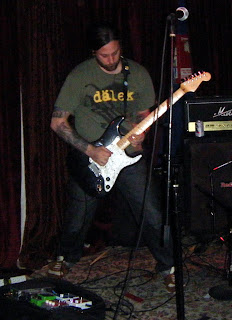 Guitarist Pete The Meet is a prestigious music school alumni - but don't let that fool you - his playing is crazed and frantic. His playing morphs effortlessly between speed metal riffs, to Ramones style crunchy chords - to Eric Clapton-esque "Sunshine of your Love" style blues. 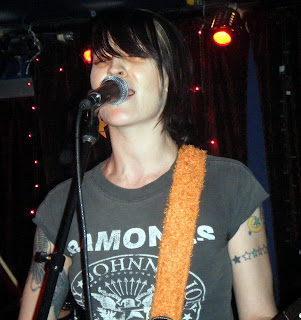 For her part, Suzy sings with just enough rough edge on her voice to make you stand up and take notice. 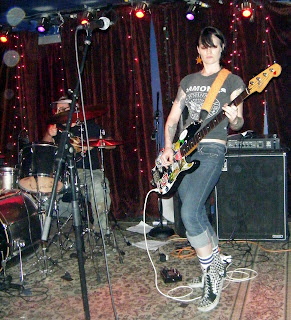 What impresses me even more though, is her bass playing.

All of the songs are built around a very strong groove, and the bass stands out as the driving force. 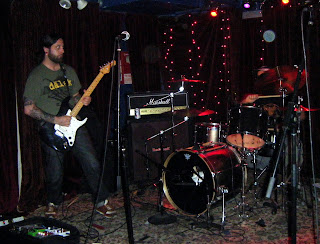 The boys are sophisticated musicians with a dirty edge to them. 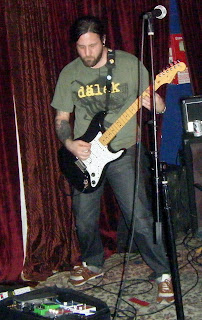 Pete becomes one with his pedals 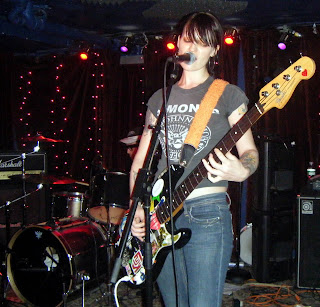 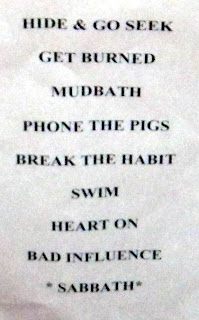 This band kicks serious ass.
Here is how they describe themselves (on their homepage)
Sounds Like:
The Runaways doing Black Sabbath in their butts with strap ons
Indeed.
Find out more here:
http://www.myspace.com/superpotentdeathbaby
Check out their next show at Trash Bar on August 30th.

That King Crimson mural is absolutely mind blowing! They had one of the best covers in the music history, without a doubt.

The band & review are both great. I enjoyed reading, seeing and hearing it all.

Once again- a passionate and enthusiastic post from Dave.